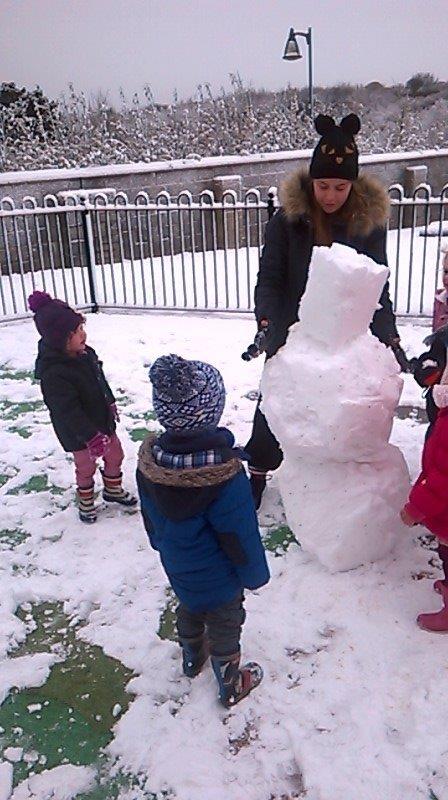 Snow arrived in Cork last week and even though it was only for a short while it was all very exciting. All the children in Crawford were excited to see the snow outside. Abigail, Maya and Harry tried to make snow angels when there was only a thin layer of snow. Maya even made a small snowman in her hands. Everyone was excited to be out on Tuesday when the snow first started to fall. However Robyn and Lucy did not like the feel of the snow falling and wanted to go inside but enjoyed a window seat and ventured out again after the snow fall.
Wednesday when the snow was nice and thick we all went outside and built a snowman. Robyn was busy helping Danielle roll a big ball of snow, while Harry, Seamus and Aine helped Ciara to make the other ball. When the snowman was built he was a little bit lopsided so all the toddlers and Montessori children joined together to gather more snow to balance him. Adam and Chloe used shovels to gather up snow. We called our snowman Olaf. Olaf did not last long as everyone had a great time knocking him down again.
Snow balls were flying around everywhere during the snow. Everyone gathered up the snow and threw them at the walls. Even Sarah had a great time throwing snow balls. Luke had a snow ball in his hand but it was too cold for his fingers but he didn’t want to leave it down or throw it away. Eventually the cold got too much for him. He put it down gently on the ground. When another child approached to take it, Luke picked it back up despite the cold through his gloves.
When we went back inside after all the chilly fun we soon warmed up as Danielle led us in her special exercises. Then we snuggled up with lots of blankets for story time. I know the drive in can be a bit off putting mums and dads but we are kind of hoping for another snow day soon.