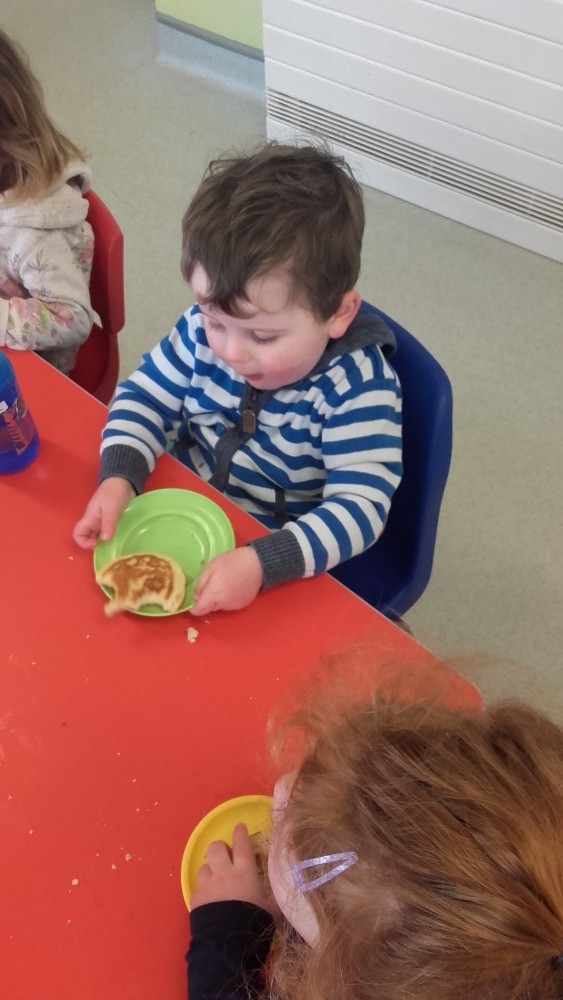 Pancake Tuesday was an eventful day here in Crawford Childcare this week with pancakes and surprise snow showers.

In the Adventure Room some of the children told us about their favourite toppings. Aoife said she really liked honey, Eilish likes banana pancakes and Ellie likes hers topped with strawberries. A few other children said they like chocolate on their pancakes. Daniel said he is a chocaholic!

The children all had pancakes in the Adventure Room and before eating there was a bit of a flipping contest. Aoife and Amelie’s pancakes didn’t flip but you could see the concentration on their faces as they raised the pan up and down really high. Danielle flipped some of the pancakes. A lot of the children preferred to skip the tossing and went straight to the eating.

The day started with great excitement when the snow fell. It was so exciting for the children to go out and feel and see the falling snow. Aoife, Logan, Amelie and Daniel enjoyed a later snow fall by running around making tracks. Logan said “Look where I have been.” Sam and Tess said it was very cold. Evelina and Kate gathered snow with their hands, made a pile and jumped on it.

When Lee tried to climb the steps on our climbing frame he put his hands on the snow. It was as if he suddenly realised how cold it was and he made a face at his hands.

One of the children in the Discovery room brought in a carrot because they wanted to make a snowman but there wasn’t quite enough snow for that so he went off to think how else to use his carrot. It later become a drumstick in a marching band!