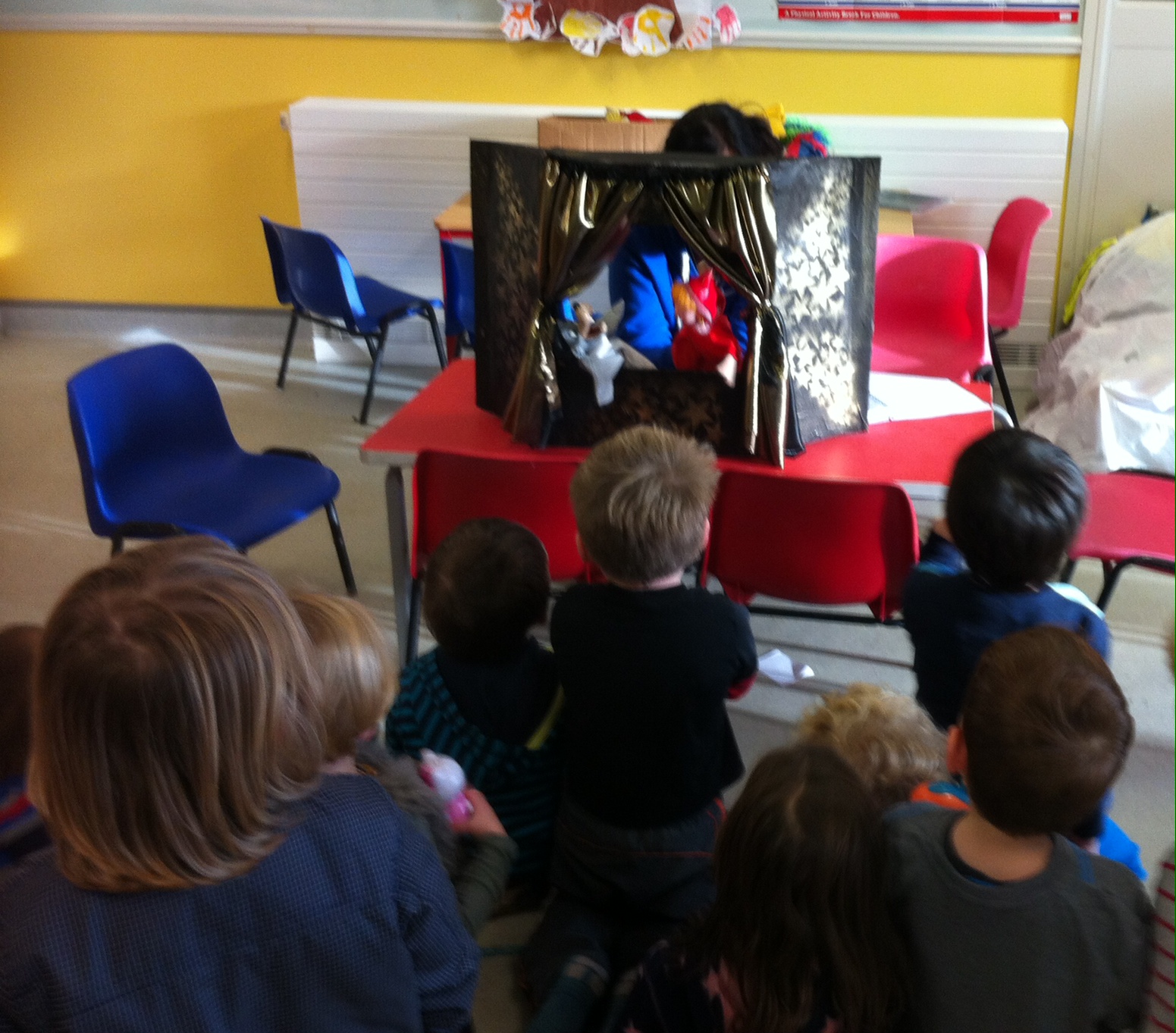 Every week as your refuse is collected – spare a thought for all those discarded cardboard boxes. They can be useful! So, rather than just ignoring that big cardboard box I saw in the staffroom, I decided to give it a chance – a chance at a bright new future and a chance at being a star!
The puppet stage was initially meant to be a “news window” where the children could sit down, draw back the curtains and talk about any news they had. This worked for a while but the children soon lost interest. It wasn’t until Maya commented “it looks like a stage” that I had the idea of introducing puppets.
I was a bit nervous that day as it was my first time using puppets. Those nerves quickly disappeared as I looked around the classroom and saw bright eyes and wide smiles as I retrieved the box of puppets. The look of excitement on Abigail’s face was priceless as I pulled the puppets out of the box. You wouldn’t have been able to hear a pin drop in the room as each child waited attentively for the show to start.
I quickly learned that it didn’t matter what puppet, or accent I used, in fact I could have just talked with my hand and they would still have been intrigued. Harry, Ryan and Liam especially liked it when the puppets communicated to them “Hey boys and girls, has anybody seen any big bad wolves around?” (Little Red Riding Hood). They all had great fun singing ‘Twinkle Twinkle’ to sing the Big Bad Wolf away. When we had finished it fascinated me to see Sophie and Maya collect puppets of their own to recreate their own version of “Cinderella” as the other children watched.
Puppets are a wonderful tool to use with any group of children. At times the children seem to respond better to the characters more than the humans. There is just something about having a little puppet talking that draws you in. Puppets foster social interaction, communication, role playing, imagination, storytelling, listening and much more.
The Montessori’s in Crawford Childcare Glanmire are thrilled with the ‘Puppet Theatre’ and with all the bad weather we are having, it seemed the perfect excuse to do a little indoor crafting. I am excited to say the theatre will be perfect during rainy weather to keep our Montessori’s busy and entertained.