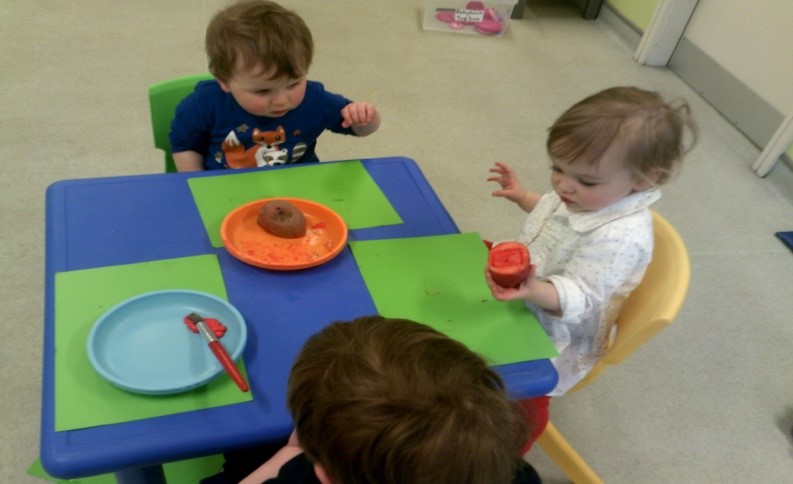 Recently we have been exploring potato stamping with the children in the baby room. This is a new experience for many of the children in this room. We decided to introduce this as some of our babies have shown a sensitivity to using their hands and feet directly. Although interested in the process of watching others doing this there are one or two who just haven’t liked the feel of the paint being directly on their hands and feet.

As the babies seem interested in the activity we decided to give using different tools a try and so in came the potatoes!!

The baby team carved different shapes into halved potatoes and let the children choose which ones they would like to use. The children seemed really excited to be using potatoes to paint with. Charlene showed us how it was done and pressed her potato loaded with paint on to the paper.

The babies took a long time and concentrated really hard when painting their spuds. The room even went quiet although only for a little while! Eventually when the children were finished painting the potatoes they stuck the potato to the paper and sometimes the teachers helped them to push down on the potato and hold onto it and when they removed the potato after a few minutes they were thrilled to see the result! Some even said ‘’oh wow’

Later we extended the activity by carving letters on to the potatoes. We talked about letter sounds and what words started with those sounds. This helped us to introduce the idea of letters through a fun activity developing early literacy through messy play! The teachers didn’t need to help us so much this time. We can’t wait to try using more different tools in our art work!!